As I said in the entry on the novel Superposition, it had liked me enough to, if I had the opportunity, read its sequel, Supersymmetry. If the previous novel was a fun techno-thriller with lots of action and interesting scientific aspects about  quantum physics, the second part surpasses all these aspects. The action is much more exciting and thrilling than the first, the characters are better drawn, and the plot twists are astonishing and well made. I usually defend the theory that sequels are worse ... this case is clearly an exception.
Not that the novel does not have drawbacks, ... the science creaks a bit, but I decided to prefer fun versus credibility. 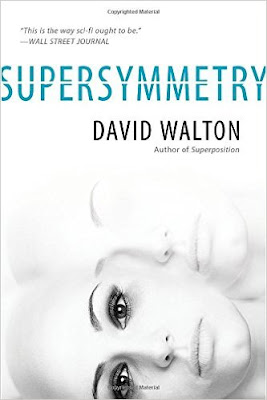 Furthermore, the use of the technology at a quantum level that is one of the pillars of the novel is original but  repeated too much along the story. I also criticize David Walton  about not exploiting the oddities of one of the characters, a crazy and eccentric scientific. His extravagances and occurrences are points that enhance the plot.

From here, spoilers of the first novel. I recommend you to stop here if you have not read it.

The story takes place a couple of decades after what happened in the first novel, and the protagonists are the two "twin" daughters of the protagonist, Sandra and Alex, resulting from the non-overlapping versions of her daughter Alessandra. Their paths have been diverging after spending a few years with great proximity. The sudden appearance of the Varcolac triggers a series of very worrying terrorist attacks and cause that the two sisters must undertake a trial to try to beat him before the two versions collapse and revert to a single person.

I do not know if it's because of the brevity of the novel, but the end has seemed me a bit rushed. Satisfactory, and it certainly made me think about it twice, but rushed.

In short, a good techno-thriller that improves the first novel in my oppinion, both in development and concretion of the plot and of the characters. I had fun reading it, and that sometimes is enough virtue. I will continue pending the work of David Walton.
Publicat per dreamsofelvex a 20:18