Three months ago I commented on the blog The Emperor's Railroad, by Guy Haley, one of the novellas published by Tor. It is a strange and successful blend of epic fantasy  and post-apocalyptic novel seasoned with zombies and angels and full of misteries about the causes of the situation that reflects the plot of the novel. The worldbuilding is very interesting, the  style is attractive and the protagonist intriguing. I really wanted to know more about the universe that Haley has created , so I was waiting for the second part, The Ghoul King. 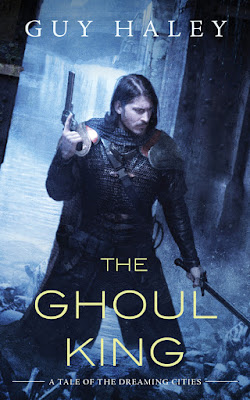 The story is set just after the previous novel, and uses a very similar structure, as it is also told in past and in the first person by one of the secundary protagonists that has been a spectator of the wanderings and adventures of Quinn, the Knight, on the road that leads to his mysterious goal (in this second part it have often come to my mind the character of the Gunslinger in The Dark Tower by Stephen King, with whom Quinn has some similarities).

Contrary to what uses to happen to me, I liked this second part better than the first. The story is more attractive, is better structured, and, above all,  some of the mysteries that arose in the previous novel, as the origin of the Angels, are solved satisfactorily and surprisingly. Although the solution to the puzzles causes that new questions are opened, leaving the reader satisfied one hand and intrigued by the other, which has a lot of merit.
I do not know if it is because the doses are the right size or they are properly spaced in time, but I am hooked, and I really want to know more about the fascinating universe of The Dreaming Cities, in which I hope Guy Haley will immerse once again to explain more adventures of the enigmatic knight Quinn.
Publicat per dreamsofelvex a 19:59