I am a big fan of the work of John Scalzi. His imaginative and fun style is perfect between more complicated and profound readings. I have read almost all of his work: five books of his iconic saga  Old Man's War (except Zoe's tale), and his independent novels, such as Lock In or Redshirts, for example. 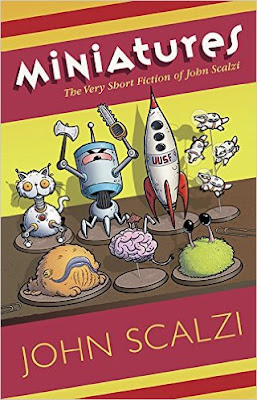 Still, I must admit that I would not have given a chance to the anthology that I present to you today, which includes his best short narrative (no, better VERY short: a maximum of 2500 words), if it does not come to be by the complimentary comments of my friend Leticia Lara in her blog  Fantastica Ficcion.
And I would have made a great mistake, because in these brief stories the wit and the sense of humor of Scalzi shine with their own light and have the perfect dose. It happens to me often when I read stories in which humor has a very important weight that jokes become repetitive if the story is too long.
It is not a book for laughing out loud, but you will devour its pages with a constant smile in your face.
I have read these stories in a week that I had very little time to read, and the  length of the stories is perfect for these situations: few pages, and a complete and entertaining story. Although I am convinced that if I had caught it in a moment with time I would have read it in a couple of hours at most.
The anthology consists of 17 stories and a poem and, because of its brevity, commenting them is synonymous of spoiling them, so I will limit myself to mention the general themes of which they treat.
The main subject that touches Scalzi and that also appears very often in his work of greater length is the contact with extraterrestrial beings. But not the first contact and the discovery, but the conflicts that would derive from the daily coexistence with beings totally foreign to us. He knows how to get a lot of juice out of these situations.

There are also a couple of fun stories related to superheroes and supervillains, and another couple related to artificial intelligence and their opinion of humanity. Although if I have to highlight one, the one I found most ingenious has been an interview with Pluto after it became a dwarf planet instead of a planet.

In short, a very entertaining and enjoyable reading, totally recommendable. In March Scalzi is going to publish the first novel of a new saga of space-opera, The Collapsing Empire, and the reading of these small stories has increased my desire to read it. I have the ARC ready in the reader, so in a short time it will appear here.
Publicat per dreamsofelvex a 10:37