This is going to be one of the novels we're going to talk about more this year, I think nobody will remain indifferent, and opinions will be extreme in both directions.
The Stars are legion is a space-opera with many original and surprising aspects,  and that mixes very diverse situations to create a rich history, with a lot of details, several unexpected plot twists and a very good structure. 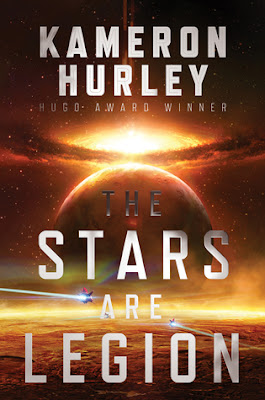 One of the highlights is the world-building. The Legion is a set of artificial organic worlds that are in decline. The surface of the worlds is not inhabited, but its interior is, and various inbred clans are struggling to conquer the maximum of worlds to be able to obtain the scarce resources that exist. The appearance of a new planet that comes from the inner part of the system will provoke the struggle between the two predominant clans.
The organic functioning of the interior of the worlds is very original (recycling, conduits with peristalsis, the openings between rooms...) as well as the technology needed to be able to travel between them.
The story is told in  first person, and from the point of view of two very different characters. Zan is an unreliable narrator, because she has lost her memory, and we accompany her in the process of discovering the world in which she has awakened. Jayd also belongs to this world, but the matriarch of the clan has offered her as a wife to the leader of the rival clan to try to establish a truce. From the beginning it becomes clear that the two characters have had a love story and have a hidden plan, which we will discover as we advance inside the plot.
Although basically a science fiction story, a very important part of the plot takes place on a journey through the interior of one of the worlds, and at that time acquires characteristics of a fantasy story. This part has at times reminded me of John Varley's Titan. Placing this kind of scenario in a space-opera context is risky, and it doesn't work well always.
The aspect that I think is going to cause controversy is that in this imaginary universe there are only women. All characters are female. It is an original point, and more bearing in mind that these women often become pregnant. I had a problem with this; leaving aside the reproductive issue, I had a hard time imagining a couple of the main characters as a woman. Her attitude, reactions, expressions, relationships with other characters ... when I realized I was imagining them as a man. It is not a problem of the story, but mine, but it is an aspect that has influenced in my final valoration.


The aspects that have not convinced me of the novel are very personal, and therefore I recommend you reading it without doubts, for its originality, for the spectacular world-building, and for the display of imagination.
Publicat per dreamsofelvex a 20:31