Another great author I deleted from the list of those who had not yet appeared on the blog. I know Greg Egan more for his short stories than for his novels, the compilations Axiomatic and Luminous, among other anthologies of other authors, were partly responsible for my current interest in short narrative. Today I will comment  a novella, The four thousand, the eight hundred, that had already appeared in  Asimov's magazine and Subterranean Press will publish it in a few weeks.
I perceived a change of style with what I had read so far from this author. The plot is much more affordable than some of his stories, with very interesting sociological reflections, but not with philosophical reflections that caused the reading to be sometimes stodgy, and neither would I qualify it as hard science fiction, subgenre in which Egan stands out. 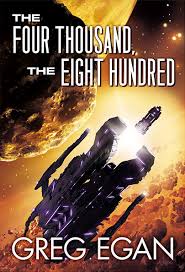 The atmosphere is very interesting. The story is located in the two great asteroids of the belt, Vesta and Ceres. There are human colonies in both of them, and between them there is an exchange of materials in the form of huge blocks that travel slowly in space. Ceres exports blocks of ice and Vesta blocks of rock to supply the deficiencies of the other asteroid.
The societies of the two satellites are similar, but in Vesta a situation occurs that causes that part of the population, descendants of a group of the original settlers, is undergoing an active and very powerful discrimination by a great part of the rest of the population. Although events of protest and even sabotage are organized, the situation does not change, and much of this population chooses the slow exile to Ceres in survival capsules installed in the blocks of rock.
Egan touches one of the burning issues of our society, unfortunately: the refugees and their dangerous travels to reach an area where they hope to find shelter and well-being. It is inevitable to think of the parallelism between the Mediterranean Sea and the emptiness in which the blocks move with their stowaways.
It is a pity that the final situation, in which the maximum tension occurs, is resolved very precipitously. A few more pages and a little more explanation to make the resolution more gradual would have improved the final result. It is not the best thing I have read of the author, but it is a very correct novel and I recommend it to you.
Publicat per dreamsofelvex a 15:35