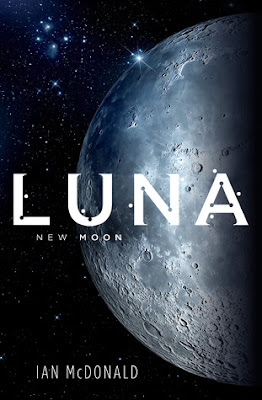 Luna: New Moon by Ian McDonald was one of my favorite readings from last year. I was very surprised that it didn't win any of the important awards, but I was much more surprised by the variety of opinions that it gathered among the people I use to share comments with. Oppinions are extreme: you love the book, o you really hate it.
In my oppinion this second part, Wolf Moon, is even better than the first, altouhgh those who did not like the first probably will not like it and I would not waste time trying,  because the structure and formulla is very similar. But  those who liked the first one will love this second one, because it maintains the virtues of the first, improves some defects, and introduces new  very interesting situations.
I 've read lots of comments comparing Luna with several kind of stories: a western,  a Venezuelan soap opera, and with A Song of Ice and Fire. I decided to qualify it more as a mix between Dune and the Godfather, and I maintain my position after reading  the second part.


The novel has two strong points:  the world-building and the plot. I love the moon that McDonald has created as a scenario, he is able to place us in that relentless habitat very easily presenting a lot of technological, architectural, and energetic details. I really liked how he talks about the physiological differences between people born on the moon and on Earth, and in the difficulty of adapting from one habitat to the other. Another great idea is the four elements that always have to be in green numbers in the account of the inhabitants of the moon: carbon, air, water and data, but it is a pity that it doesn't deepen into how the low classes manage the situation, since, as in the first novel, most protagonists are part of some of the richest families of the Moon, and they do not have these kind of problems.
There is less presence of sex than in the previous novel, but the variety continues surprising me. 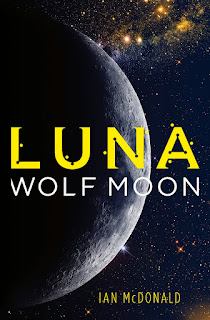 The part of the plot concerning the political and economic conspiracies between the families that have the monopoly over the different resources has interested me as much as in the first one, but the part of the action much more. There are shocking scenes on the surface of our satellite: knife fights, extreme survival, persecutions with Rovers ... very exciting and addictive.
Look out!, from here some spoilers of the first novel

It's a very diverse and choral story, with many protagonists who have point of view, which makes it more dynamic, but causes that the plot is not so easy to follow. In the first book I commented that there were many similar characters that could get the reader confused. The fact that many of them died in the first book makes it easier, and some that were secondary become principal in this second book. Although I quickly got back into the story, I think I would have appreciated a little introduction-summary of the facts of the first novel.
The story places us a year and a half after the events with which the first volume ends, and has several parallel plots. On the one hand, it tells us how the younger members of the Corta family are surviving after the attack received by the McKenzie, and on the other hand the hard journey to the Earth by Lucas Corta to try to recover the lost empire. If we add that the McKenzie are going to explode into a civil war and that the governments of the Earth are increasingly interested in being the ones who manage the lunar resources, it raises us a new scenario of intrigue, adventures, and conspiracies that I have devoured with a greater interest than I did with its predecessor.

In short, a second part that I liked the same as the first, but has entertained me much more. Politics, economics, revenge, adventures, and survival in a hostile environment and a spectacular setting. Totally recommended.
Publicat per dreamsofelvex a 9:25