Three years ago, tired of losing details of the fantastic world of Malaz due to my worrying lack of memory, since the books translated into spanish by the now defunct Factoría de ideas were published every six months, I decided to read the 10 books written by Steven Erikson in english, without stop. 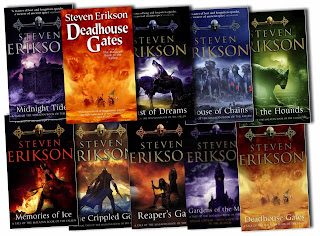 I enjoyed it, because the saga is rich, complex, funny, exciting and full of action and mystery. Still I not recommend the experience, as I ended up with an important surfeit of epic fantasy, and only two years later I was able to read something with swords and magic.
This surfeit caused that I still haven't read the saga written by Ian C Esslemont located in the same universe, though I have already bought a pair of the six books of which it consists. Later I discovered that both authors, once finished the stories they wanted to tell, chose the prequels to continue working in the universe they had created. Erikson, in The Karkhanas Trilogy, chose to narrate events that occurred thousands of years before what is explained in the main series, and based on a part of the plot that was not precisely the one that motivated me more. Instead, Esslemont opted for a far closer time to the books I had read, and characters  who I wanted to know more about. So when I had the opportunity to acquire the book, I did not think twice.

(Be careful, from here there are some minor spoilers for those readers who have read only the first book, the Gardens of the Moon.)
Dancer's lament is the first part of  Path of Ascendacy saga, which explains how Kellanved and Dancer met, join forces and  organize the Empire of Malaz and finally ascend to the throne of Shadow and become Shadowthrone and Cotillion.
All this part of the plot is told in the main books without clear explanations (well ... this really is general for all plots...) and wrapped in a mystery. Now I understand why, I guess the writing of this saga was already planned. 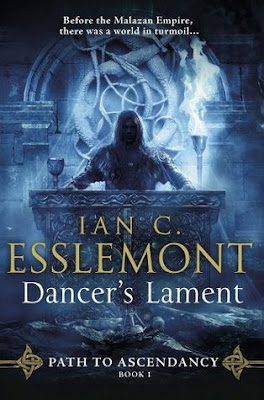 It's the first book written by Esslemont that I read, and I like his style. It is different from Erikson, but they have a common tone: action, magic, very different characters, great importance of dialogue and a sense of humor that I quite like.
I want to emphasize that enter in the world of Malaz has seemed much easier than other times. The warrens, gods, magic, ascendants ... I found it much more familiar. I do not know if it is because the style  of Esslemont is more direct or I have already mastered the intricacies and trails that run this complex universe.
A couple of minor bugs: the relationship between the two protagonists is fun, but a bit repetitive, and the character of Kellanved is treated almost like a secondary character, never used as a point of view to tell the story, and often shown as light-hearted. I am convinced that it is planned to keep part of the secret, but I hope that in the next novels Esslemont grant him more prominence and charisma. The final resolution of some of the plots has not finished to convince me, they finish abruptly. 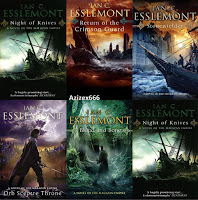 In short: it has been a pleasure to meet old acquaintances, although guided by the hand of a different author. The novel has everything that I ask to a story of epic fantasy: good characters, some mystery, some action, some magic, a good scenario and all narrated with good style and sense of humor. It will not win awards for originality, but it has fulfilled my expectations for sure.


Esslemont has convinced me as a writer, and while I wait for the second book of this saga, as I want to visit Malaz more often, soon I'll start the Saga of the Malazan Empire, without reading it all at once, I've learned that surfeits are not good.