The fortress at the end of time - Joe M. McDermott (english review) 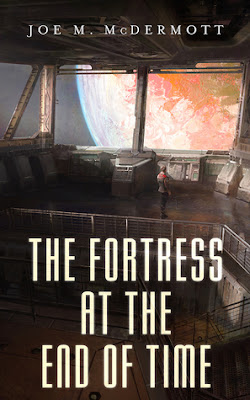 The main premise of the novel that I present today is very interesting: humanity has expanded through the galaxy thanks to a technology of transport between the stars, the ansible. This technology, in addition to transporting materials, allows people to be transported, but through an instant cloning process, so that at the destination point a clone is created with the personality and memories of the cloned person.

The colonists destined to populate new worlds are only cloned once, but the military who run the space stations of the colonies can be cloned later to different destinations if they merit enough.
This interesting argument is sprinkled with a good atmosphere: the colony is the farthest from the cradle of humanity, with an orbital station almost in ruins and the mission to monitor the possible return of aliens with which humanity has already fought. In addition, the planet on which the station orbits is at the beginning of the process of terraforming, and colonists must fight against high temperatures, lack of water and abundance of sand.
The main protagonist is Ronaldo Aldo, an ensign assigned to this station that tells the story in the form of a confession in which he will try to explain and justify each of his sins.
It is a pity that with such good ingredients the final result is not very good. Although during the progress of the plot there are some scenes and situations that arouse interest, the problem is that the author has not connected them correctly. The role of the different characters in the station is confusing, as well as their relationships and motivations. There have been times when I have not understood why things happen, and in others, I have become bored.
In its favor I will say that the resolution of the plot has seemed to me brilliant and surprising. Having such a good argument and scenario and a correct ending, the main problem lies in the length of the story: I think that what is a novel at times boring and disjointed, polishing some details would have been an excellent novella, even with  merits to be nominated for the big awards.


In short, a pity. Although the novel has not convinced me I will be attentive to what this author publishes, I really liked some of his ideas.