Viewing the panorama of Spanish and Catalan politics in recent years (I have the feeling that we are in a perpetual election campaign, but this is not the place to talk about it) I really have appreciated a different approach to democracy as Malka Older offers in her debut novel, Infomocracy. 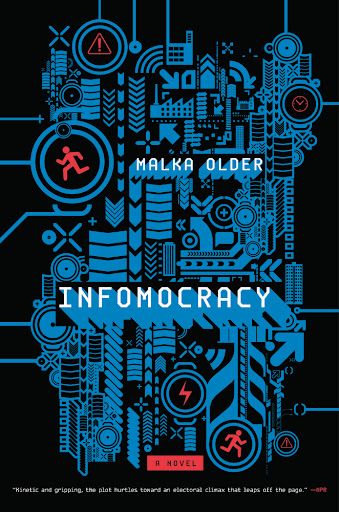 The novel has two remarkable aspects, a great socio-political speculation and the worlbuilding. In the near future the majority of the earth's population has welcomed a new system of representation, the micro-democracy. Each group of one hundred thousand people, a centenal, decides their government. The party that wins more centenals around the world wins the Supermajority. There are factions that can be elected everywhere, others only in a continental level, and many only locally, in a miscellanous mix of very interesting options.
This implies a very important paradigm shift that affects the sense of belonging to a state, nationality, ethnicity ... to start thinking as a member of a centenal. Of course, not all states agree with the system. The results in big cities are so diverse that a mosaic of very different governments coexist so that crossing a street you can go from a liberal and little authoritarian government to have you arrested for smoking a cigarette in the street, or you can get your tires flat because it is not allowed to drive  vehicles that use fossil fuels.
The novel takes us to the end of the third election campaign of the micro-democracy. In the first two elections the winner of the super-majority was the same party, and polls indicate that they can repeat victory. We follow the plot through the story of three protagonists: a  campaign responsible of a party that presents around the globe, an activist who is against this new form of democracy, and a member of the Information organization, a curious mixture  of internet, news agency and international security agency (this organization is one aspect that has convinced me more of the novel).
I liked how Older introduce us in the atmosphere, she manages to explain the new system she has imagined and its consequences without excessive info-dumps, slowly submerging  us into the details of the plot, although at first we may have some doubts. A similar thing is done with the new technologies presented, they appear as if they are not rellevant, as an accessory to the story. I appreciate this way of making me enter the universe she created, she managed to pique my interest very quickly.

Unfortunately this interest waned as the story progressed. The main mistake she has made in my opinion is the choice of the main plot. I think she wasted all the work of social and political speculation to finish transforming the novel into a spy story with some action, even some romance, but not too attractive. A pity, because I think the scenario deserved much more, and there are really interesting moments. I think it's a narrative problem due to lack of experience, but Malka Older shows she has an imaginative and very interesting speculation capacity, and I will be awaiting her next jobs.
Publicat per dreamsofelvex a 9:43