Wesley Chu is a multifaceted writer known for his trilogy about Tao, published by Angry Robots, that has achieved some important awards and nominations including finalist in Goodreads elections in the category of science fiction. 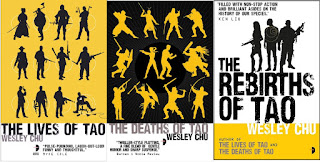 His latest novel Time Salvager, objective of today's post, has achieved, even before it is published, a film addaptation directed by Michael Bay. 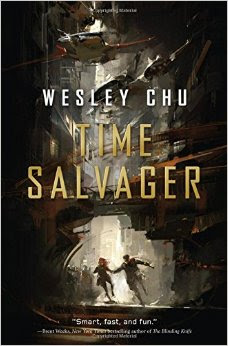 It is understandable, because the novel clearly presents a cinematographic style, which at times is a virtue (the novel has a lot of rhythm and it's very entertaining), and others a defect (because it not deepens in many interesting aspects of the plot). The story takes us to the XXIV century and presents a humanity that has been able to conquer and colonize many of the planets and moons of the solar system, but with a polluted Earth without resources and with much of the population with health and alimentation problems. The protagonist is James, a Chronmen, a time traveler with a mission to move to certain points in history to rescue resources of the past without altering the flow of time. The world-building is really interesting, probably the best aspect of the novel is how Chu creates an attractive mix of dystopia, space-opera and  time travel. In addition, the first third of the story, in which it presents the Chronmen, the company for which they work and the rules they have to enforce in their travels, is highly recommendable.
Too bad that from that point a totally incomprehensible and unjustifiable decision, in my opinion, of the main character (although the author justifies it arguing that we all continually make bad decisions) results in a much more predictable and full of clichés story, with an innocent style much more characteristic of young-adult novels, against which I have nothing, but in this case is not what I expected or what appeared to be offered during the first third of the novel. The end, too open, neither has convinced me.

In short: An entertaining novel, I recommend to read it during the summer, with a very good world-building and presentation of the plot. If you allow me the film comparison, I would say it is a blockbuster with which you will spend a good time, but if the author would have deepened a little more in the plot, the story would be better.
Publicat per dreamsofelvex a 19:42