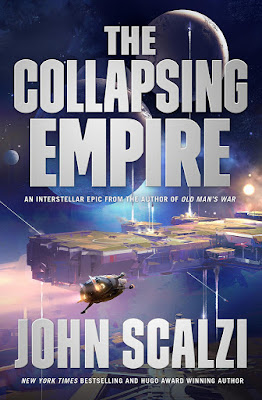 The usual readers of the blog already know that I am a great fan of the work of John Scalzi. I am rarely disappointed, because I know what I am looking for when I read one of his novels: entertainment, fun, a quick reading story basically based on dialogues and a peculiar sense of humor that sometimes gets out of hand (not this time).

Although he presents good ideas and original books in other genres, Scalzi is accustomed to excel in space-opera, so his most important work is Old man's world saga, made up of 6 books. I have read 5 of them, and although I have liked them all (with more or less enthusiasm) I think the universe was already a bit worn out, so I consider it a wise move to have started a new saga with the novel that I present today, The Collapsing Empire .
It is a novel of introduction to a new universe, therefore the author has to make an effort to get the reader to feel comfortable in the new scenario and to present all the characters (it's a choral story). It has the advantage that it represents a novelty, therefore awakens interest, and in this case the drawback that the plot is a little loose and accelerated in the final part (and there is even some small error in the plot that has not convinced me).
Humanity has expanded through the galaxy thanks to the discovery of The Flow, a space that allows fast travel between the stars. There are few doors to the entrance and exit of this space, and in these areas, whenever there is a solid celestial body nearby, humanity has settled in it, although there is only one, End, that is a planet of the terrestrial type in which we can live without protection on its surface. Therefore, most humans live in artificial habitats on the surface of satellites or planets, or in orbital stations, since contact with the Earth was lost a long time ago.
Humanity is organized in an Interdepency, in which each human settlement specializes in one type of resource, and for the rest it depends on the commerce with the other colonies. Each settlement, and therefore each resource, is run by a noble family (this structure reminds me of Ian McDonald's Moon), and one of these families, based on the planet Hub, which is located on the central axis of the Flow, is the one that governs Interdependency.
The story begins with the death of the Emperox and the coming to power of his daughter, who is not prepared for it, since his brother, who was the heir, has died in an accident. As the title of the novel tells us, the empire is going to collapse because there will be a change in the space that allows the journey between human settlements that will leave them isolated slowly and inexorably. 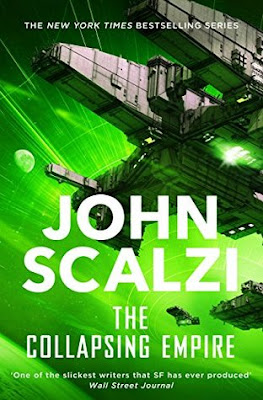 The plot focuses more on political conspiracies and arguments related to the economy and trade than on the action, which I found very interesting, although there are a couple of very exciting action scenes. As I said before is a choral story, and most of the strong characters are women. Men are relegated to more sibylline roles, or to those who have to get saved.
During the first half of the book the rhythm is perfect, and the story very entertaining and addictive. There are two or three details of this new universe that I found great, but I can not comment to avoid making spoilers (although the title is already a spoiler in itself). Unfortunately, the plot runs out of steam in the final part.

In short, a light and entertaining novel that presents a scenario full of possibilities, full of good ideas and characters with charisma. It is a novel that introduces a new universe, and I think it has prioritized this aspect in front of the story itself, and that has impacted on the development of the plot, which has not completely convinced me.
Anyway, I sure will read the second part, The Last Emperox.
Publicat per dreamsofelvex a 11:49