I discovered Kij Johnson thanks to the stories published by Marcheto in his fantastic page Cuentos para Algernon. I liked his style and later I searched several of its most prominent stories (which are many, as she has been a finalist and won the Hugo and Nebula among other great prizes) and even I dedicated an entry to her stories long ago. When I saw that Tor was going to publish her new novella The Dream-Quest of Vellit Boe, I could not resist myself. 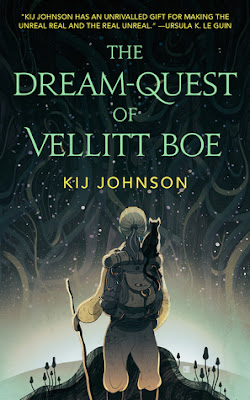 The story tells us  the  travels of a professor of an exclusively female college following one of her students, who has fled from the city, captivated by a man from another world. From our world, in fact, since the story is set in the world of dreams, in which some dreamers of our reality can enter through certain magical doors and interact with its inhabitants. The disappearance of the girl could create serious problems for the university, so Vellit Boe, ancient traveler and very knowledgeable about the ways and customs of her world, begins her search in order to get her back before they embark on their journey to our reality.
What I did not know and did not discover until the end of the novel was that it was influenced/based on a story written by HP Lovecraft, The Dream-Quest of Unknown Kadath, which was located in a dream world, seting of several stories written by the writer of Providence, and that I was totally unaware of. I say was because I remedied the situation, since, convinced that the reading experience of the novel of Johnson should be totally different depending on the degree of knowledge of the work of Lovecraft, I decided to listen and read some of the stories set in his Dream's world.

My first impression without knowing the history of Lovecraft's novel is that the novel of Johnson is entertaining, but weakens in the plot. It is a narration of travels in a very rich and imaginary world but in which the author does not dwell, since only gives certain details of the different landscapes and cities through which passes the protagonist. Yet the author hooked me, but although the road is entertaining the ultimate goal disappoints a bit. I did not like the fact that the old adventures of the protagonist are so influential in the plot, too many coincidences a little forced in my opinion so that the pieces fit. Instead I found very original the part of the underworld with its strange beasts, ghouls, ghasts and gugs.

The universe piqued my curiosity and in recent days I have read several of the stories of Lovecraft located in the land of dreams. It is very interesting as The Dream-Quest of Unknown Kadath refers to several of them. The problem is that with such a recent reading the positive view of the story of Johnson changes a little, because much of what I thought was original and enjoyed is already present in the work of Lovecraft. It is true that with a touch a little more modern (the use of dialogues, the action scenes ...), but the background is similar, deliberately, I think. The most distinguishing aspect is the feminine presence.
The author justifies her creation at the end saying that when she read the original story in her childhood she felt uncomfortable by the racism in the world created by Lovecraft, a fact in which we agree. Later she also felt uncomfortable by the total absence of women in the story, so basically it's the reason of the choice of female characters in her novel. There seems to be consensus among experts on racism of Lovecraft, but there are different opinions about his misogyny.

In short, I think it's a story that can enjoy those readers who discover this fantastic universe whith this story and then want to delve into it (as in my case), but I doubt more to recommend it to those who are already familiar with Lovecraft's work. But it can always be a good reason to return to the world of dreams and I'm sure they will enjoy picking references and Easter eggs.