Sometimes the assessment you make of a story on the spur of the moment is quite different of the one you would make when some time has passed and the feelings that it has generated in you mature. It happened to me recently with Time Salvager, by Wesley Chu, a novel I read last summer. It is a story with a very interesting scenario, a post-apocalyptic future in which the only way that humans get certain resources is traveling to the past and taking them trying not to alter the timeline (in boats about to sink, spaceships about to explode, cities about to be destroyed ...). I liked the atmosphere and the first part of the book is very entertaining. An impulsive decision of the protagonist, one of these time travelers, little explicable in my opinion, created a situation of conflict that eventually leads from a story that was promising and full of ideas  to a more conventional story, of action, persecutions and romance. 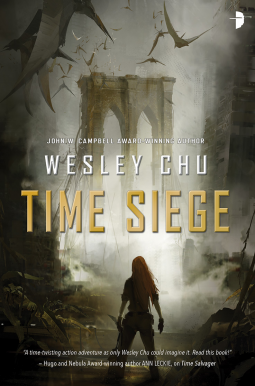 Although the story did not quite convince me and I had not planned to continue with the saga (yes ... is another trilogy) when the possibility of asking the second part, Time Siege, in Netgalley appeared, I decided to give it a try.
The truth is that it has been worth it, it's a good novel to read on vacation time, a very entertaining blockbuster, like its predecessor, but with a better organized and constructed story.
There is more variety of views, as some of the secondary characters of the first part gain prominence, some others change roles, and interesting new additions appear. On the other hand, the atmosphere is more monotonous, since much of the action centers on the island of Manhattan of the future, full of skyscrapers half in ruins and connected to each other, where many of the savage tribes descended from the original inhabitants of the earth live.
Wesley Chu dominates very well the use of the action scenes, thrilling and exciting, but repetitive in some moments, like some of the introspective scenes of the main character. I think overall the novel has too many pages, but the last part has hooked me, both the intrigue and the action part, and the end left me pleasantly surprised, presenting a very interesting  scenario and leaving me wanting to end the saga, which, frankly, I did not expect when I finished the first novel. If it continues with this progression, the end of the story promises.
Publicat per dreamsofelvex a 19:34