One of the anthologies I liked last year was Meeting infinity, the fourth book of the Infinity project led by Jonathan Strahan. In this project each book consists of stories with a common axis to analyze the future evolution of humanity. In the case of the book that I present today, Bridging infinity, the fifth one, the main subject is great engineering projects.

Like all anthologies written by various authors is very irregular and diverse, but in this case much more since the authors have chosen very different visions of the project, especially  the temporary location, so that there are stories located in the coming decades, but also in the coming millennia. This generates a loss of homogeneity that is what gives more meaning to this project in my oppinion.


The lineup of authors is spectacular, with well-known authors, but in the end, of the 15 stories, there are few that I consider memorable. Everything starts well, since the first three stories are very good, and they have in common, apart from that are very didactical, the exploration and modification of our solar system, but with very different styles.
Alastair Reynolds chooses research and exploration of the structure of the Sun as the goal of his story Sixteen Questions for Kamala Chatterjee, although it contains some surprises. Pat Cadigan in Sixteen Degrees of Separation freedom focuses on the construction of new habitats in the satellites of Jupiter and bodily and emotional changes that will suffer the first colonist. And in the third story, The Venus Generations, Stephen Baxter uses as a main character a long-lived family in the complicated process of reversing the greenhouse effect in order to terraform Venus. 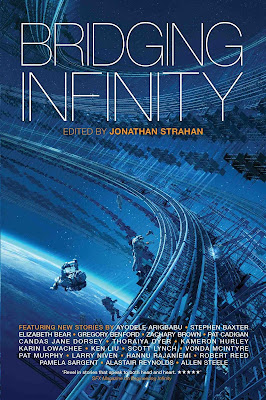 There are a couple of stories I want to highlight for the engineering project they are descriving, and which are those that have generated me more sense of wonder. Robert Reed shows his mastery with Parables of Infinity, an interesting story about an ancient IA who works as a construction worker in a huge generational ship. Although who wins the prize is Allen M Steele with Apache Charley and the Pentagons of Hex, which is about a Dyson sphere made up of thousands of different habitats occupied by alien species. Trains travel between these different habitats, and the story talks about a group of human vagabonds that survive among them. A spectacular scenery I've discovered that has already been used in other of his works and that I'll investigate.
Ozymandias, by Karin Lowachee, explains the story of the robotic construction of a huge  spacecraft, from the point of view of the only human who supervises of the project. I liked this one for the use of humour. Instead, I highlight The city's edge, by Kristine Kathryn Rusch by the atmosphere of mystery, and the sadness and despair of its main character.
Several of the stories deal with the effects of climate change. From his group I particularly liked Cold Comfort, by Pat Murphy and Paul Doherty. The protagonist is a scientist who is developing a system to collect methane from the thawing permafrost, and the story tells how the project evolves. From the scientific point of view it has seemed me plausible, which is disheartening, because the tone of the story is not exactly optimistic.

And to finish the book, the best story, the one by Ken Liu, Seven Birthdays. Excellent, as usually happens. The story is about seven moments of the long life of the protagonist, but I'd rather not comment much more to not spoil the reading. Just for this story worth it the book.
In short: I liked more the previous anthology, but the quality of many of the stories of this one is very high. The problem is that there is much difference between them; I have liked ones a lot and others very little, so the overall rating is not as high. I'll still be aware of this project, both for future editions (I hope that there will be), as for the three I have not yet read.
Publicat per dreamsofelvex a 11:24